For the second home fixture in a row Saracens are advertising an away fans ticket offer.

Anybody with a Gloucester postcode had the offer last week; if they travelled up the Allianz Park and Gloucester win they would receive a full ticket refund, also the offer extended to if Saracens won a refund would also be given. A good offer basically go and watch Sarries and Gloucester for free, a few Gloucester fans picked up on the parking or alternative public transport costs choices that were given out by Saracens, but all in all not a bad offer?

A full ground for the first home game of the season always brings a great atmosphere, so enticing opposing supporters will help to build that.
Armed with a sparkling new ground and the much talked about playing surface surely the capacity of 10,000 should be easily filled? So why only 9,200 arrived at the Allianz park even with the refund ticket offer for the travelling Gloucester fans?

With the second home fixture Sarries bring out a second ticket offer, only this offer has a very tongue in cheek side to it.

Saracens are offering Bath fans a unique opportunity to get their money back if Gavin Henson scores a point during the top of the table clash at Allianz Park on Sunday.

Clare Jackson of Saracens Supporters Services explains; “If Gavin Henson scores a point at Allianz Park this Sunday we will give Bath fans their money back – but you need to have a Bath postcode as your home address”.

“It really is that simple – if Gavin gets on the score sheet, Bath fans can travel back home this Sunday with a full refund”. 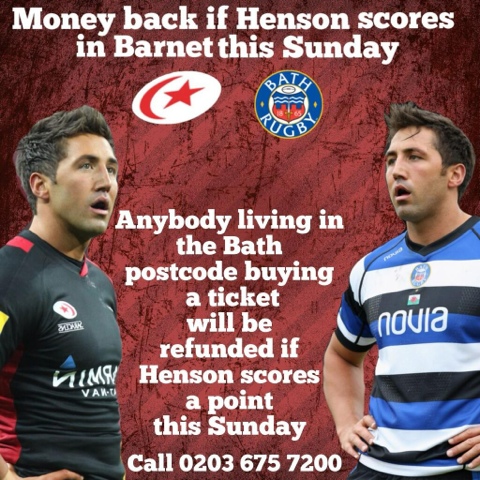 How are we meant to perceive this latest ticket offering from Saracens?

Banter in rugby is one of my favourite things in rugby, fans having a light hearted non-malicious poke at players and fans all in jest, but is this acceptable from a club?
I'm sure it's aimed to encourage publicity, media speculation and sell extra seats. For these reasons the marketing team from Saracens has managed to succeed, but is it fair to target an ex-player of their club in such a way?

All rugby spectators are very much of Henson's misdemeanours and his introduction to Bath hasn't been smooth. Henson hasn't helped himself over the years (understatement) but from what we are now led to believe Bath are trying to keep him shielded and allow his rugby to do the talking. A large portion of the Bath faithful were not keen on him joining the club, but he's here now and a Bath player therefore deserves the support of the fans.

To play devils advocate for a balancing point how would Saracens feel if Bath chose a similar option, and made a similar deal for one of Bath ex-players now at Sarries.....Matt Stevens.
Matt Stevens left Bath in what can be described as 'bad circumstances' resulting in a 2 year ban. Now there are many puns in which you can make yet all would be in bad taste, so is it fair to isolate Henson??

Love him or hate him I can now assure you the dream this Sunday for the Bath fans is to go to Allianz park, beat Sarries and with Henson making the winning kick........ A big ask but how good would it be!

The Gloucester deal I felt was not a bad offer to entice the cherry and whites down to Barnet but this Henson offer is possibly a little bit of a stretch. Saracens are being innovative with there offers that can't be denied just don't make it personal. Henson's media hype makes him all to easy a target and allows the media to jump straight on the story.

In the end let's hope it's a good fixture and hopefully Bath can take the spoils.