Have Tiger's dared to disrespect the RFU??

Everybody knows that Richard Cockerill is a passionate man in regards to Leicester Tigers, so passionate he has the odd tendency to overstep the mark.

Passion is a good thing and shows commitment to the club and sport, crossing the line can be a detrimental choice.

To use abusive language directed at any official in rugby is a definite no-no and goes against the fundamental ruling of upholding respect in rugby.

Cockerill has fallen foul of this on more than one occasion. On this occasion his outburst was viewed by a vast array of rugby fans worldwide in the Aviva premiership final, not the best advertisement for English rugby and leading the RFU to take action.

Cockerill was hit with a nine week touchline ban after being found guilty of using obscene, inappropriate and/or unprofessional language and behaviour towards fourth official Stuart Terheege in a reaction to a tackle on Toby Flood.

Tigers found this punishment to be harsh and opted to make an appeal against the judgement. The appeal hearing failed to agree with Cockerill and Leicester Tigers and up held the ban, although took the decision to amend the fixtures involved in the suspension. The suspension now begins on the 24th of August and runs until the 18th of October, including two pre-season fixtures against Jersey and Ulster and ends with a Heineken Cup tie with Treviso. 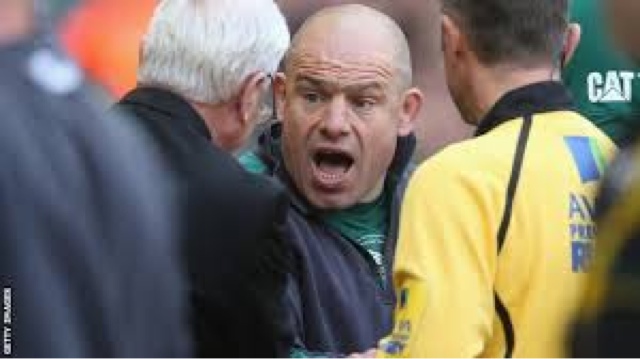 With the offence taking place in the Aviva premiership final would it not be more apt for the punishment to be served in that competition? Including friendly fixtures is a reduction in its self.

I have no issue with the length of suspension just the rearrangement to appear as if they're still being vigilant but in reality easing the pressure on Cockerill and Tigers. This re-timing of Cockerill's ban still isn't to Tigers liking and have released this statement-

"We are pleased that the judgement vindicated our decision to appeal and we are grateful to the panel for the consideration that they showed, although we await with interest the written judgement to see why the pre-season game against Montpellier falls into a different category than those against Jersey and Ulster.

"We remain disappointed with the RFU's conduct in this matter but, as we have previously stated, this is a matter we shall pursue privately.

"The focus now is on the remainder of our pre-season and our preparations for the start of the new season."

To release a statement stating that you are 'disappointed' with the RFU's conduct is not only showing a lack of respect for the RFU but also condoning Cockerill's behaviour. It would of been more appropriate if they had stipulated they were disappointed with Cockerill's conduct, not the governing body who are still trying to install respect in rugby!

I have raised the point before in regards to keeping respect going in rugby http://bathbytes.blogspot.co.uk/2013/02/referees-respect-at-all-times-or-lot-to.html the game it's self is growing ever popular and more and more children are taking up rugby, is Cockerill's behaviour and Tigers open disregard of the RFU what we want the future players to believe is now acceptable? Do we also want the rest of the rugbying world to look at Cockerill and Tigers and believe this is the way English rugby is going?

To support your director of rugby is a very admirable and appropriate thing for any club to do, but to publicly hit out at the RFU for actually easing Tigers pain by moving the suspension to include non-competitive fixtures shows very poor form. Although I truly now believe the scrutiny that will now be heaped upon Tigers and Cockerill will be very intense, from the RFU, fans and media will all be paying a very close attention but will it make any difference?

Posted by bathbytes at 03:47 No comments:

The signing of Gavin Henson was met by many of the fans with great trepidation!! A lose canon with a history of losing sight if why he's famous..........he's a rugby player!!!
For many people the major issue with Henson is his ego arrives five minutes before he does. Another problem I have with him is the factor he's an extremely naturally gifted rugby player, his belief of self worth appears to overshadow that.
When I heard Henson had signed I hoped and believed that what Nick Blofeld told us'I think Gavin is much more settled and mature person than that image we have in our heads.' I thought let's give him a chance and let his rugby do the talking.
All of Henson's history with drunken incidents will always be a concern, and once again it's raised its head. A night out with new fellow team mates she Henson ending it being knocked out by Carl Fearns, possibly not the best start he could of hoped for with the controversial move to Bath. Apparently waltzing around as if he owned the Pig and Fiddle in Bath aggravated his fellow team mates and they try to calm him down, unfortunately it appears Henson wasn't in the mood for listening and subsequently Fearns took the action to release a telling blow for Henson.
As it would be wrong to condone Carl Fearns actions, and I expect him to be punished accordingly, the main concern is Henson's attitude on the evening and what did he say to Fearns for him to react in such a manner? It's not pretty viewing and does no favours for Henson, Fearns or the club. http://youtu.be/1hY5OqBki7Q
Bath have had their fair share of incidents that have put them in the news for all the wrong reasons. Matt Stevens was handed a two year ban for testing positive for cocaine in 2009,this was followed shortly by a huge drug scandal resulting in 5 players leaving the club. Michael Lipman, Alex Crockett and Andrew Higgins receiving a nine-month ban after being found guilty of failing to submit to drugs tests on two separate occasions. Former wallabies player Justin Harrison also received an eight month ban after admitting to drug use and stating 'everyone's doing it'. All of this came to light after an end of season night out in London finished with an altercation with a group of Quins players, who also were celebrating the end of season in the same pub, it resulted in Harrison being knocked out and taken to hospital. Bad press is not what Bath want and they have been managing to appear to be cleaning the club up.
As a supporter looking in there seems to be a good sense of unity between the players, a group of players who all seem have a good bond with each other. To use the #BathFamily at times seems very appropriate, they look like a solid unit and that helps build a team and will transpire onto the pitch.
So this raises the point - how would a primadonna fit in with the team? It appears not very well. As it is very early into preseason and already Henson's behaviour has aggravated his team mates this doesn't bode we'll for the following season. It appears that Henson has a few lessons to be learnt on how to conduct yourself in public, and Fearns demonstrated what will happen if you misbehave in Bath, it's about respect if Henson wants support in Bath he needs to earn that!
With a talented player but continuously shrouded in controversy and already demonstrating its going to be a bumpy ride, can the fans get behind him a support him on the pitch or is it now just a call for Bath to cut him lose before he's even played in Blue Black and White, can he be controlled or will bad publicity continue to follow. As Henson is such a well known player anything he's now involved in that goes slightly amiss there is going to be huge publicity and is that good for the clubs reputation?
Posted by bathbytes at 01:18 No comments: