High ticket prices had been expected, but I feel many rugby fans hadn't quite realised the full extent of what faced them.
Mainly what it will cost to be an English rugby fan and to follow and support them at live games.

There is a large spectrum of price ranges through the group stages. Broken down into four categories; A,B,C and D.
Class D being the cheapest and A being the most expensive. There are a few fixtures running with category D tickets for £15 for an adult and £7 for a child, a category A in the same fixture will cost £60. Great pricing and will enable more fans to go to visit some of the lesser teams play and create a good atmosphere in which some of thw teams nay not of played in.

In an opposite pole of this other fixtures featuring the "big name's" in rugby certainly are priced differently. A prime example is France v Italy at the millennium stadium where a category D is £50 and category A £250.
It is England (the home nation) that will cost the most to watch in the group stages. Starting prices at Twickenham are £75 then raising up to £315!!!!

The biggest shock comes with the tickets to the semi-finals and final; category D £150 and category A £715 with no concessions at all.

So why are the English fans being hit so hard and are the everyday fan being priced out of the bigger matches? Is the greatest spectacle in the rugby world being overrun by corporate side of rugby?

What's your view?
Are the cost of rugby world cup tickets out pricing fans?
https://www.surveymonkey.com/s/QVY5X5W 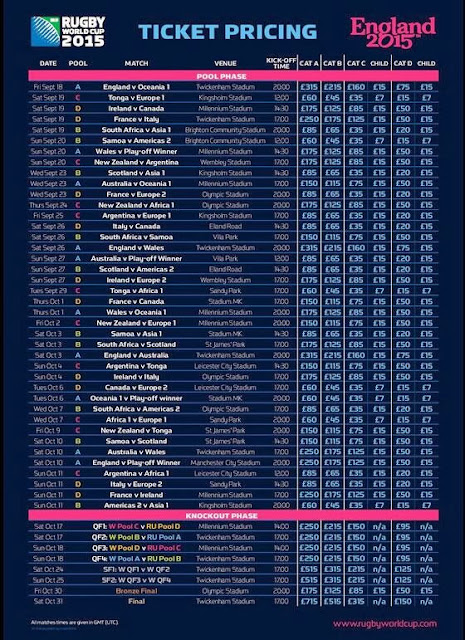