As a bit of a traditionalist I've always loved the way that rugby has been a sport for players of all sizes and ability.
You had the big bulky guys as props, the little hard nuts as the hooker, the big fearless back rowers, tall lofty second rows and Terrier like nippy scrum halves. Whereas your backs were the less physical but had pace and ability to run and avoid tackles with their jinking feet, stick the guys who can run like a whippet on the wing and the guy who can get a good hard tackle but still packing a bit of pace in at full back.

Obviously with most sports there comes evolution, rugby is possibly the biggest example of this since turning professional. Rugby is their job, therefore they need to be the best they can. Fitness, strength and skills now are imperative, these guys are now machines.

One man who turned rugby on its head and potentially the most evolutionary player in rugby was the "man mountain" Jonah Lomu. A 19st 6'5" tank that can move like faecal matter off of shovel. Suddenly everyone looked up and noticed that the big guys weren't just forwards but can serve a purpose in the backs, eventually leading to the "crash ball" backs.

Bath this season appear to be going against the trend a little (until the arrival of Burgess, whenever that will be) with much success. Almost a return to old school rugby.
Predominantly a back line of Cook/Stringer, Ford, Eastmond, Joseph, Rokoduguni, Woodburn/Watson and Henson/Arscott we've seen a return to some scintillating running rugby from Bath.

There has been a few cameos from Banahan, and as much as I rate him as a ball carrier, he's possibly been the least effective of Bath's Backs. Would Burgess realistically bring much more dynamism to Bath's backs? possibly not, would he make an effective back row ball carrier? Definitely! For me I believe Mike Ford's original diagnosis for him to play on the flank or at no8 would make sense.

Many pundits and ex-player's have stated there isn't a better centre partnership in the Premiership this season than Eastmond and Joseph, their link up work is phenomenal. It's another dimension that Bath have brought back to rugby, teams have learnt how to tackle the "bash" boys in the backs and how to close them out of the game, the step and pace has become as issue to tie down.

Kyle Eastmond being awarded Aviva Premiership player and try of the month for September shows a player of that ability can have more impact in the game. Using the forwards as the impact players linking up with the backs is being performed well at Bath, it also helps having the standard of forwards they have. From 1-8 in the pack have good carrying skills and know how to pop a good offload.

The almost rugby league clatteresque style that is becoming more part of the game, so far this season has been overshadowed by "the step", slick hands, guile and tenacity! Long may it continue and we are spoilt with more free running expansive rugby. 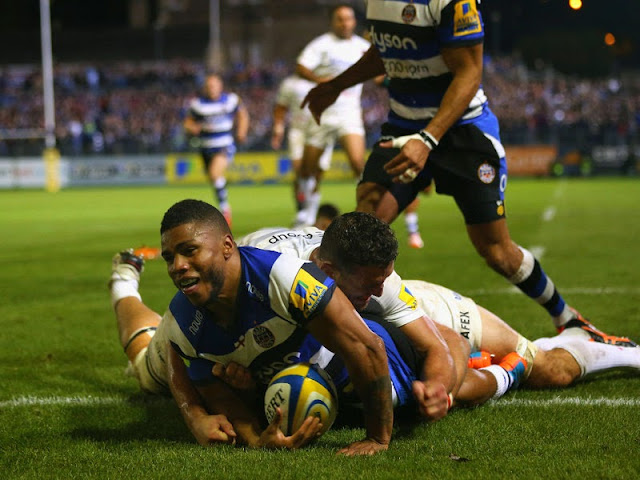