Grab on tight it's going to be a bumpy ride! 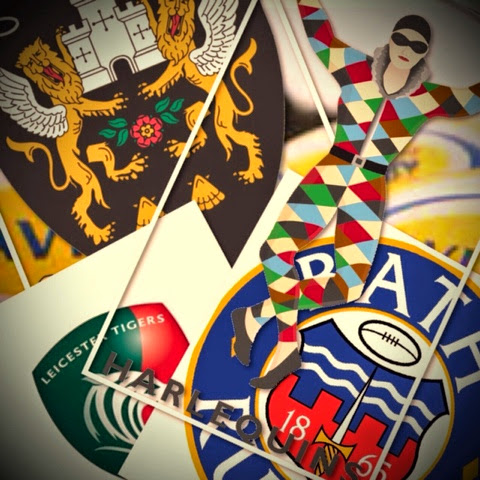 At 3.15 on the 10th of May the whistle will blow on the start of the final tense 80 minutes of premiership rugby. Everyone will be on the edge of their seat waiting for the fat lady to sing, but they'll have to wait through a full opera before she sings her final note.
This weekends fixtures are a form of heaven for number crunchers and stato's with so many if buts and maybes surrounding the play off positions, In fact the only team who is guaranteed to finish in their current position in the top 5 is Saracens. From 2nd place to 5th place there is 10 points separating the teams, Saints in second leading Tigers by 4 points looks the safest place to retain. 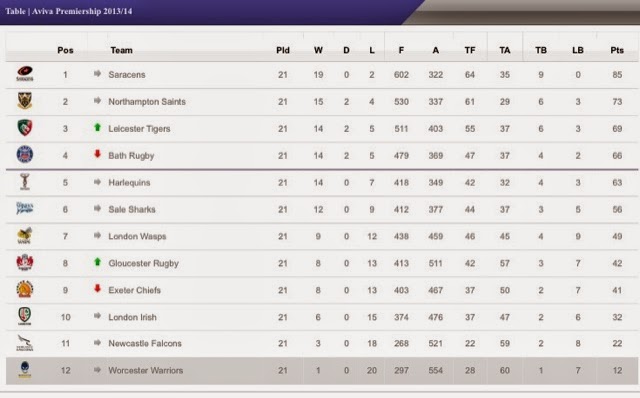 The main event his weekend is, what is being billed as the 'winner takes all' fixture between Harelequins and Bath Rugby at the Twickenham Stoop. A sell out crowd will pack the Stoop in anticipation of wanting and hoping their team will win and grab the final play off spot.
Bath have occupied a top four position all season but a loss to Quins on Saturday will see them lose out.
Quins last ditch bonus point win against Chiefs in round 21 is what helped set up this galactic battle and increase the pressure on Bath. Tom Guest scoring their bonus point try with five minutes to go, with Chiefs leading throughout the game it was a great fight back from Quins. The Chiefs vs Quins could be very reminiscent of Quins season, chasing all season then pipping the win at the last minute.
Baths draw with Saints also helped to squeeze the teams together, a win would of more than certainly had Bath secure 4th, the two games could of almost been scripted to take it down to the wire in the last fixture.
The game has become a must win for both sides as there is no other possible outcome from the game, whoever wins is in the play offs. The potential was there even if Bath lost but got a losing bonus point and try scoring bonus they could sneak the 4th place, but it comes down to games won so Quins would leapfrog Bath. With the points the same and Bath's points difference being better, the 2 draws for Bath could undo their top 4 finish. Quins being the home team the advantage definitely is in their favour, although Bath have yet to lose an away premiership game in 2014 and only 2 all season.
There is also one more scenario which would also be a miraculous one if it happened, here goes Bath score 4 tries, lose by less than 7=2 bonus points then Quins win but don't score 4 tries, winning with kicks and only taking 4 points from the game, Bath would finish on 68 and Quins on 67. What a finale to the end of season!

There are also other movers and shakers that can happen within the top five, it's not all about the Quins vs Bath game.
Tigers against Saracens could throw out a change of positions, obviously Sarries are safe up at the top of the tree, but Leicester have the chance to go above Saints or drop below Bath. For Tigers to raise above Northampton they must get a try bonus win against Sarries and hope that Saints lose to Wasps and take nothing from it. On the flip side of the game if Tigers do lose they need to make sure they get something from the game in the way of Bonus points, because Bath being 3 points behind there is a possibility Bath could jump above and grab the 3rd spot.
- Bath 5 points win & Tigers lose with no points = Bath 71 Tigers 69
- Bath 5 points win & Tigers lose with LB point =  Bath 71 Tigers 70
- Bath 4 points win & Tigers lose with LB point =  Bath 70 Tigers 70 and with the teams drawn on points it would be again done on matches won in which that would see Bath take the 3rd spot. So many potential twists and turns there is still so much to play for!
With only one guaranteed team knowing when/if they are playing in the semi-final, so much hinges on one round of rugby. Will we be looking at the same positions at the end of Saturday or will it be all change? It going to be a bumpy ride and if you're of a nervous disposition brace yourself, strap yourself in and enjoy the ride!
Posted by bathbytes at 03:46