Cardiff bound ~ Northampton Saints vs Bath Rugby but are the fans??

8pm Friday the 23rd of May destination Cardiff Arms Park, a definite entry for your diary. Two  clubs will fight it out for the Amlin Challenge cup - Northampton Saints will square up to Bath Rugby.
Two hotly contested semi-finals between four English sides and all former winners of the competition; Northampton Saints vs Harlequins and Wasps vs Bath Rugby, saw victories for Saints and Bath to set up the final at Cardiff Arm Park. 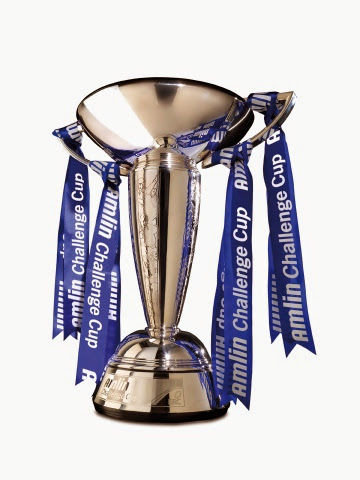 Both sides have had their share or European success, both winning the Heineken cup and Challenge cup. Bath making the Heineken cup final just the once but becoming the first English club to win the competition in the 1997/98 season, with a tense thriller against Brive just pipping it 19-18. Saints had their victory two seasons later becoming the second English team to be crowned the top dogs in European rugby, they also made the final in 2010/11 but lost out to Leinster 33-22.
Northampton and Bath are tied on Challenge cup victories at one a piece, Bath in 2007/08 season after two losses they managed to beat Worcester....... Saints won it the very next season beating Bourgoin.
Northampton qualified for the Amlin Challenge cup after failing to make the knock out stages of the Heinekan cup after some very inconsistent results, losing heavily to Leinster at Franklins Gardens the following week they returned the favour by beating Leinster 9-18. Also losing and beating Castres they finished second in their pool just missed out on making the top eight and dropped into the Amlin.
Once they entered the Amlin cup they drew Sale Sharks at the AJ Bell stadium, Saints first half performance totally blew Sale away and the game was almost won after 40 minutes. At half time Saints were 5-28 up and Sale had it all to do, the second half come back wasn't to happen with only one score for either team, finishing up 14-28.
Saints semi-final saw them face their second premiership team in a row, Harlequins travelled to Franklins Gardens for the first of the two Semis and Saints carried on where they left off against Sale. A strong performance form Northampton although Quins did attempt a come back from being 18-3 down, Quins managed to break the Saints defence once clawing back to 18-10 but Saints managed to thwart any further scores and securing their journey to a Cardiff for the final. 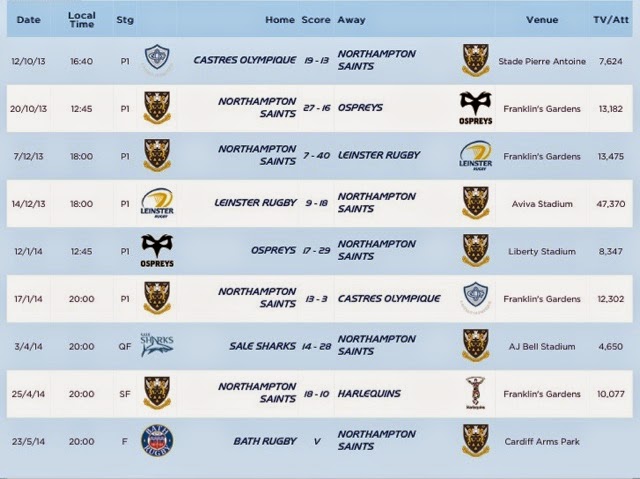 Bath missed out on Heinekan cup rugby this season by finishing 7th in the league, so decided to make the best of the second tier European club rugby cup. Bath finished unbeaten in the pool stages after beating (some very comprehensively) teams that really were obviously of a lower standard to the Premiership side.
Bath finished as top seeds after the pool stages and secured a home fixture facing their opponents from their Heinekan cup victory, not such a close game this time as Bath brushed Brive to one side with a 39-7 victory.
Bizarrely in ERC rulings the semi final destinations are drawn and even though Bath hadn't yet lost a game and were top seeds Wasps got the home draw and Bath had a trip to High Wycombe to play at Adams Park. Wasps started the brighter of the two sides in what was a fairly even first half. A try from Perenise, penalty and conversion from Ford it looked like Bath would have the lead at half time, but a late try from Helu added to Goode's 2 penalties and he happily converted giving Wasps a 13-10 lead at the break. Bath and ex-Wasps hooker Rob Webber grabbed a brace of tries which seemed to give Bath a strong lead, Wasps hit back with a flourish scoring through Johnson setting up a frantic finish. Bath held on booking their trip to Cardiff winning 18-24. 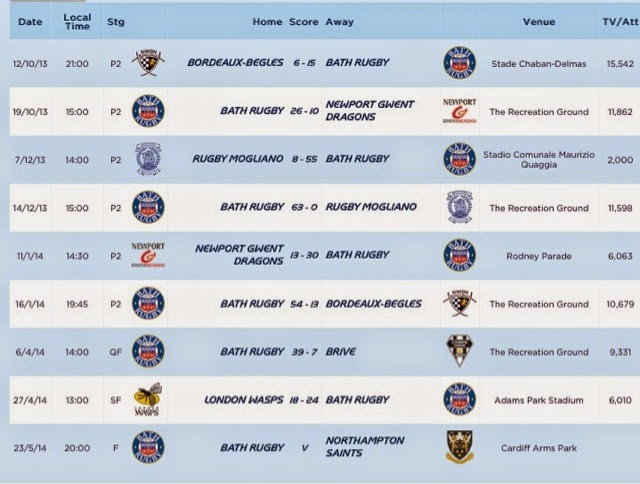 The stage is set for Bath Rugby to take on Northampton Saints, the final to be staged at Cardiff Arm Park in the shadow of the Millennium stadium where the Heinekan cup will be held the following day. With the ground being dwarfed by the it is a good analogy of the cup, the second tier European cup living in the shadow of the first tier. It is fair to a standard that the Amlin takes second Place to the Heinekan cup, and with the smaller of the two venues the fans will not be deterred from cheering on either Bath or Saints in the hope they will come away with a European trophy........or Will they?
As soon as both teams qualified the supporters were hungry for that ticket where they may see a victory, both sets of fans wanting to get their hands on a ticket to pack the 12000 seats and create an atmosphere that could lift the roof off of it's neighbouring stadium. The news is then broken to the expectant fans that the ERC have made potentially one of the biggest errors of ticket allocation in the sport, they released the tickets for general sale in September and have only held back less than 1000 tickets for each club to allocate to the wanting fans. So the bubbling atmosphere that could of been has been snubbed out by a farcical decision by the ERC.
So how can you get your hands on one of the remaining gold dust tickets? The clubs will be releasing them for sale to their season ticket holders first and then what 'may' be left (not a chance) will go on general sale, so sadly if you are a non season ticket holder there is more chance of seeing a Dodo riding a unicorn down the streets of Pompeii than getting a ticket now, unless you visit a ticket selling site and pay the bumped up over priced tickets that people are now selling taking advantage of genuine and hopeful fans.
So congratulations to the ERC who have managed to annoy, upset and disappoint almost the entirety of Bath and Saints fans!! What could of been a great spectacle of two of English's finest teams playing a final for the first time on an artificial pitch cheered on by their travelling fans has the potential to be a damp squib.
Annoyance is also stirred for many when you see a stadium such as Twickenham given a semi final of the Heinekan cup where only 25000 spectators saw Saracens comprehensive victory over Claremont. A poor turn out for a London club playing in London, not to quite fill 1/3 of the ground. To see so many empty seat at such a prestigious ground and game, then to see it's a near enough impossibility to get a final ticket for the lesser of the two European cups just fuels the fire.
If you are lucky enough to already have a ticket or manage to get a ticket congratulations, make sure you cheer loud and proud because if those who bought tickets and their team isn't there,they don't manage to sell their ticket and decide not to go it could be a very empty stadium!!!
Well done ERC!!!! 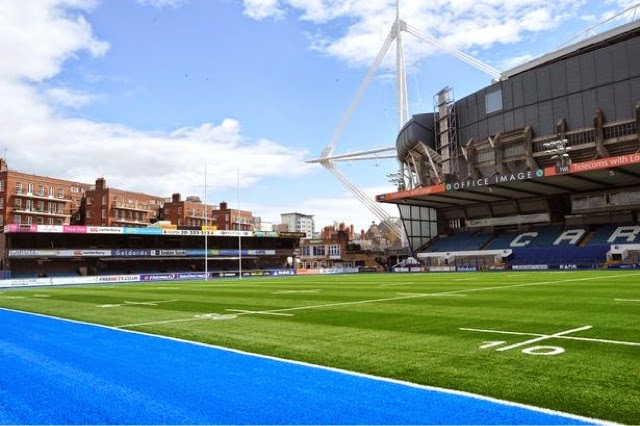